Women who exude confidence from every pore are intelligent, fierce, honest and strong. They are independent individuals who take good care of themselves, emotionally, mentally and physically. Taken aback by their power, most people don’t know how to handle such a woman.

MORE: 4 Qualities Strong Women Look For In A Man 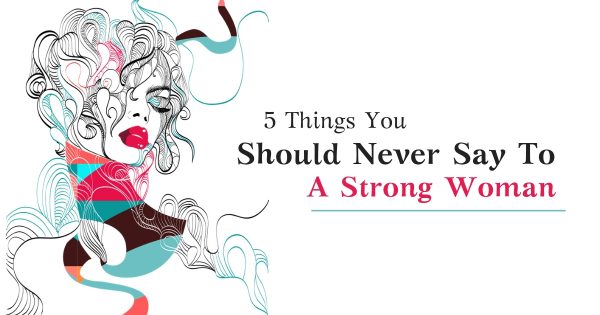 MORE: 7 Reasons Why Most Men Can’t Handle A Strong Woman

Take a look at five things you probably shouldn’t say to a strong woman, as long as you don’t want to step on her toes.

Powerful women are really ambitious. If they put their mind to something, there’s really nothing that stands in their way. Being told they can’t do it drives them even more but mostly it shows her that you don’t believe in her.

Such a woman doesn’t take someone else’s life as a sample for their own. Imitation of any kind is out of the question because strong women are genuine, living in the most authentic way as possible. Even if you can’t see it on her face, she’s probably hurt at hearing such words. Not happy about you trying to make her be someone else, it’s insulting.

You’d better refrain yourself from telling her to calm down, she probably has a very good reason. Not because she can’t control her emotions, but because she puts passion in everything she does. It makes her believe you don’t understand her at all.

No one tells a strong independent woman what her needs are except her. It proves you may want to control her and a woman like this smells toxic behavior from a mile away.

Why would you refrain someone from speaking up? A powerful woman wants and must express freely in all aspects of life. A true soul who has no boundaries of thought and should never be reduced to silence.