Einstein is probably the most famous physicist of all times. And that’s because not only he revolutionized the way we understand the universe, but also because of his words of wisdom. 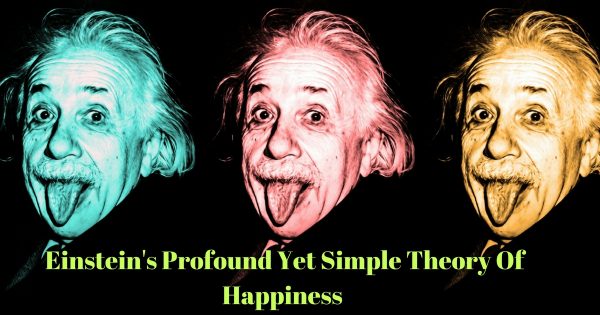 Recently, a note of his where he had explained his “theory of happiness” was sold at an auction for 1.56 million dollars. He wrote the note in 1922 and gave it to a bellboy when he realized that he didn’t have the money to tip him.

MORE: Can You Solve This Famous Albert Einstein Riddle?

The note said: “A calm and modest life brings more happiness than the pursuit of success combined with constant restlessness”.

The physicist wrote the note when everyone was congratulating him for winning the Nobel Prize and he was trying to figure out his thoughts on the matter. Fortunately for the bellboy, he was around to receive what turned out to be an incredible gift.

MORE: The Only Force In The Universe That Ties Us All Together, According To Einstein

It’s debatable if Einstein himself lived the kind of life he considered to be desirable. But his words are even more powerful now, when most of us are living a hectic life, in pursuit of fame and money, not calm and peace. Please, share this!

The 3 Problems No Relationship Can Survive
Quiz: Which Zodiac Sign Should You Date?