A man walks into a rooftop bar and takes a seat next to another guy. “What are you drinking?” he asks the guy.

Then he shows him: He swigs some beer, dives off the roof, flies around the building, then finally returns to his seat with a triumphant smile.

“Amazing!” the man says. “Lemme try some of that!” The man grabs the beer. He downs it, leaps off the roof —and plummets 15 stories to the ground.

The bartender shakes his head. “You know, you’re a real jerk when you’re drunk, Superman.” 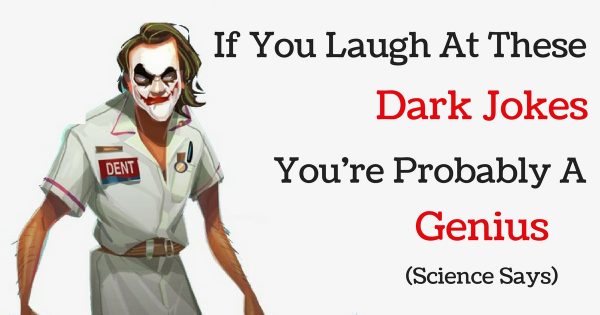 If you giggled at this joke, we’ve got news for you. According to a new study, your reaction to this kind of jokes can indicate your level of intelligence. Psychologists concluded that those who appreciate dark humor have indeed higher IQs and are generally less aggressive than those who don’t enjoy such jokes.

This means that people who are more willing to embrace dark humor and sarcasm also have a more optimistic and rather playful view of life. The link further suggests that they are able to welcome negativity with open arms. The results also indicate that they receive all the healthy benefits associated with smiling and laughing.

So why the strong correlation with high intelligence?

Well, it takes certain wit to mentally process dark jokes and uncover all the layers, while remaining emotionally detached. Almost any good joke will put your brain to work. What sets dark jokes apart from the rest is that they require a certain level of emotional control so that you really taste them.

MORE: If You Enjoy Spicy Food, You Might Be In Trouble (According To Research)

Consider the following jokes and see how you respond to them! Have fun!

1. I’m sorry’ and ‘I apologize’ mean the same thing. Except at a funeral. —Demetri Martin

A: A happy pit bull.

3. Cats have nine lives. Makes them ideal for experimentation.—Jimmy Carr

A: Because they taste funny.

5. I have a vest. If I had my arms cut off, it would be a jacket. —Mitch Hedberg

6. Q: What did Kermit the frog say at Jim Henson’s funeral?

7. If at first, you don’t succeed, then skydiving definitely isn’t for you. —Steven Wright

Don’t forget to pass this on!